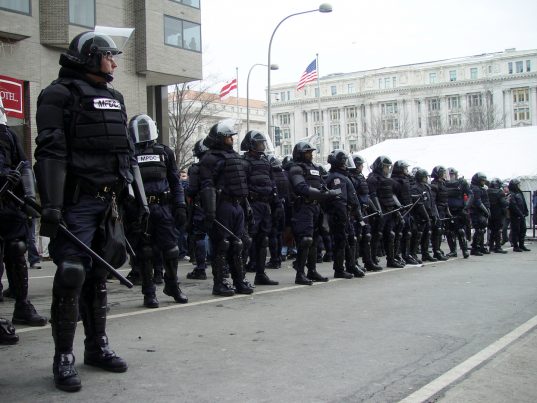 The awake and and aware of us completely understand the dormant plans for martial law and widespread FEMA camp detentions. Old documents, such as REX 84 to the newer documents, Army FM 39.4, make it clear that trouble is on the way. However, and until now, martial law and the potential for mass roundups was solely under the jurisdiction and participation of the Federal government. However, there is a dramatic sea change taking place with regard to martial law only being a Federal endeavor. It no longer is just a federal endeavor, we are seeing signs that martial law is going local.

(Article by dave Hodges from thecommonsenseshow.com)

What these events tell us, is that the 10th Amendment and local rule will soon be coming to an end.

Consider these 3 stories, which point to Federal martial law capabilities at the local level of government. The following 3 storeis involve random assassination of potential protestors, random and extreme unconstitutional full-body searches and the use of weaponized drones to enforce the “new laws”. And enforcement is performed by local authorities.

After reading this article, it will be difficult to conclude that this is anything but the Deep-State recruiting the sound of millions of marching feet to enforce the coming martial law crackdown.

Snipers On the Roof at Football Games

In an absolutely insane turn of events, a member of the Arkansas State Representatives,  Charlie Collins, has said he wants sniper teams deployed at college football games.   He has said that he want snipers on the roof at home football games in order to keep people safe from harm.

When Collins was queried about the reality of actually having snipers on the roof at the University of Arkansas’ football stadium, Collins told KARK: ‘Count on it.’

Collins is not a total flake. He does support HB 1249 which allows concealed-carry on public spaces in Arkansas. Interesting dichotomy on his contradictory positions.