Wisconsin company throws party to celebrate microchipping of its employees 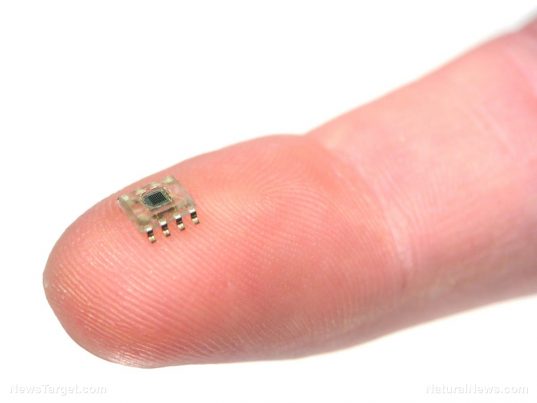 The process of centralized government becoming “Big Brother” and lording over the masses using surveillance technology and other means of controlling the population just became easier, thanks to the idiocy of those same masses.

You may have read stories in recent weeks about American and Swedish companies micro chipping employees after they agreed to take the chip voluntarily. What you may not have heard is that such microchipping has turned into a sort of ceremony that is then celebrated with after-chipping parties by fools who apparently have no idea what they’ve just done.

As noted by the Gateway Pundit, workers at Three Square Market, a Wisconsin-based firm, threw a “chip party” for employees who have accepted the Mark of the Beast willingly.

In case you didn’t know, the chips have been sold to hapless employee volunteers as “convenience” technology that allows them to ‘more easily’ and ‘more securely’ log into computers, get into the building, purchase items in the company break room, etc. And of course, the company has assured employees that hey, there aren’t any tracking capabilities built into the chip; and if you believe that, I’ve got some oceanfront property in Kansas to sell you.

Three Square Market has received international attention since it announced the voluntary microchip program, believed to be the first of its kind in the United States.

The microchip program is voluntary. If willing, employees allow the company to implant a Radio-Frequency Identification chip between the thumb and forefinger.

The RFID chip will open doors, log in to computers, and make purchases from vending machines. The technology is similar to mobile pay services like Apple Pay and Google Wallet.

Three Square Market assures employees that they will not be able to track them because the chip does not have GPS. Data on the microchip is encrypted.

In the age of social media, most Americans who still claim to care about privacy are impervious to the fact that they voluntarily give it up every time they post something on Facebook, Google or Twitter about some aspect of their lives.

But at least that’s voluntary. Those same people could choose not to divulge anything. You no longer have that choice when you’re “chipped” with a radio frequency identifier implant.

And frankly, the company can tell its unwitting employees all day long they aren’t being tracked, but that might just be complete BS. After all, the little implanted devices do send off signals; and somebody somewhere within the firm is monitoring those signals — otherwise, how could they assure everyone they are secure?

Plus, these devices are electronic, and they transmit a signal, which means they’re likely part of the “Internet of things.” That means information therein (including private data) can be hacked.

Furthermore, what’s to stop companies from requiring employees to be chipped next? Because that’s what’s coming.

Think about it: Automation and artificial intelligence will wipe out millions of jobs in the very near future. Now, some of those jobs will be replaced by other employment, but overall, I anticipate labor will transform into a corporate market, not a worker’s market; limited work means companies will dictate labor policies, not the other way around.

So either you agree to be chipped — for “security” and “efficiency” — or you can forget being hired by anyone.

Three Square Market is just the beginning. This trend will catch on with other firms. More workers who have no concept of privacy today and who think getting “chipped” will be “cool” have no idea the control over their own lives, and the lives of others, they are surrendering.

And what’s more, once that power is gone, they’ll never get it back.