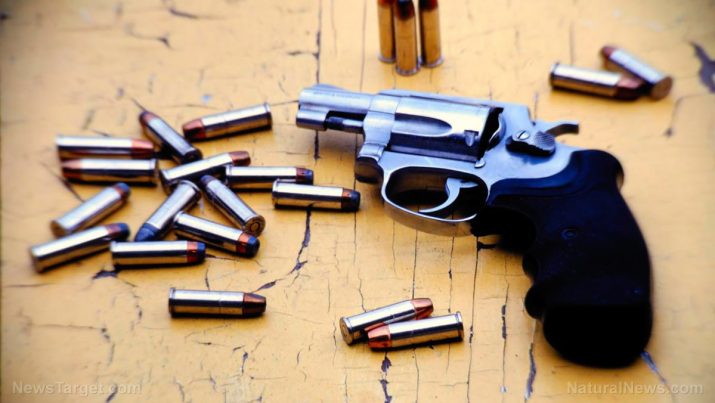 The governor of the U.S. Virgin Islands has issued an order ahead of Hurricane Irma, which is fast building in intensity and is approaching a Category 5 status, for the National Guard to confiscate guns and ammunition prior to the storm’s arrival.

As reported by The Daily Caller, the order includes government confiscation of explosives as well, and anything that the Guard believes it requires to respond to the weather emergency.

Gov. Kenneth Mapp signed the order Monday, as Irma began to bear down on the small group of islands located some 40 miles east of Puerto Rico.

In addition, the order also gives the adjutant general, the island nation’s Guard commander, authority to seize private property deemed necessary to protect the islands. And while the order is subject to approval by the territory’s Department of Justice, it’s outrageous on its face.

Mapp issued his order as he activated the Guard and as soldiers began preparing for the storm’s arrival.

“This is not an opportunity to go outside and try to have fun with a hurricane,” Mapp said. “It’s not the time to get on a surfboard.”

Fair enough, but what makes it time to violate the Second and Fourth Amendments to the Constitution?

Either way, no matter how strong Irma is when she hits the Virgin Islands, there is no good reason — and no constitutional reason — to confiscate citizens’ firearms and property. What’s really alarming here is that following the storm there could be people attempting to take advantage of victims — like looters, for instance. Without their firearms, how are victims going to be able to protect themselves?

“Well, Gov. Mapp doesn’t have the power to take guns and property,” you might say. “After all, those people on the U.S. Virgin Islands are American citizens too.”

Yes, they are, but thanks to several 100-year-old Supreme Court rulings collectively known as the Insular Cases, gun rights and gun laws on the small cadre of islands are different than they are in the U.S. proper. That’s because the islands are considered an “unincorporated territory,” so constitutional protections for basic civil liberties don’t necessarily apply. As noted by The Truth About Guns, there are six different color-coded levels of firearms licensure and ownership in the Virgin Islands:

— Blue: These are for businesses.

— Yellow: This is for home protection only, and applies strictly to handguns. And you can only have it in the residential address typed on the license.

— Gray: These are for farmers and apply to long guns such as rifles and shotguns.

— White: All active police officers have a white license.

Furthermore, the Firearms Rules and Regulations Manual states that permission to carry a gun will only be given to police and V.I. government officials, bank guards, and ordinary citizens under special conditions.

If this doesn’t convince you that, in the worst of circumstances at least some American authorities will turn authoritarian, nothing will.