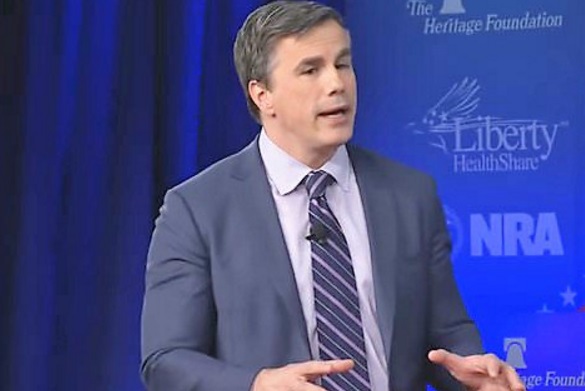 Following my publication of a popular article that asks whether we can trust the FBI in this Las Vegas shooting investigation, the president of Judicial Watch, Tom Fitton, has now concluded exactly the same thing: “I don’t trust the FBI.”

The Gateway Pundit carries the full story, adding that Tom Fitton, “said what everybody is thinking — he simply doesn’t trust the FBI.”

And why should we trust the FBI when it was headed by a traitorous liar and corrupt Clintonista cartel cover-up artist named James Comey?

Here’s the full story via The Gateway Pundit, which has been providing outstanding coverage of the Las Vegas shooting:

President of Judicial Watch Tom Fitton dropped a bombshell following the Vegas shooting rampage and said what everybody is thinking–he simply doesn’t trust the FBI.

Fitton tweeted, “I don’t trust the @FBI.” and the tweet went viral because many Americans agree with him.

Tom Fitton has been on the front lines as the head of Judicial Watch as they file one FOIA lawsuit after another in pursuit of the truth when it comes to Hillary’s emails, Benghazi, Obama unmasking scandal etc. so it’s no surprise that he came out and straight up said he doesn’t trust the FBI as they conduct an investigation into 64-year-old Stephen Paddock.

Fitton isn’t the only prominent person suspicious of the investigation; Sheriff Clarke came out this week and voiced his concern about the Vegas shooting investigation as well.

Former Milwaukee Sheriff, David Clarke said on Thursday that he has been in law enforcement for nearly 40 years and he’s suspicious about everything surrounding the Vegas shooter because of the lack of public engagement.

We are dealing with the Deep State FBI…how can we trust them?

Wednesday night a press conference was held jointly by the FBI and the local Sheriff in Las Vegas concerning the recent killing of at least 59 people in that city a few days ago.  The Sheriff was very transparent in the information he supplied.  But the major question that everyone wants to know is – why did the killer do it?  What was his motive?

At this point, the FBI Investigator took the microphone.  Instead of providing any information relevant to the mass murder – suicide, he berated everyone there and the millions watching on TV.  The Special Agent In Charge for the Las Vegas Division of the FBI said:

Our resolve is firm.  We will get to the bottom of this no matter how long it takes…we must focus on facts.  We cannot give into conjecture.  We cannot respond to every little Twitter feed that may indicate a theory.  We need to be focused on the facts.  You need us to be right.  You expect us to be right and we want to be right….

After interviewing the killer’s girlfriend and God knows what else the FBI has uncovered, they provide nothing.

The FBI’s lack of transparency along with the corrupt and criminal acts by former FBI Directors lead all of America to begin forming conspiracy theories and to further lose trust in the FBI.

It’s time that the FBI cleans shop and restores it name and reputation.

The Islamic State tripled down on the Las Vegas massacre on Thursday.

On Monday ISIS released a statement on the Las Vegas shooting then doubled down on its claim in a rare second statement later the same day.

What does the FBI know about Paddock’s association with ISIS or evidence that he converted to Islam? The Las Vegas Sheriff only once briefly floated the idea that maybe Paddock was radicalized.

The American people deserve to know what pushed Paddock to shoot into a crowd of thousands of innocent people, ultimately killing 59 and injuring over 500.