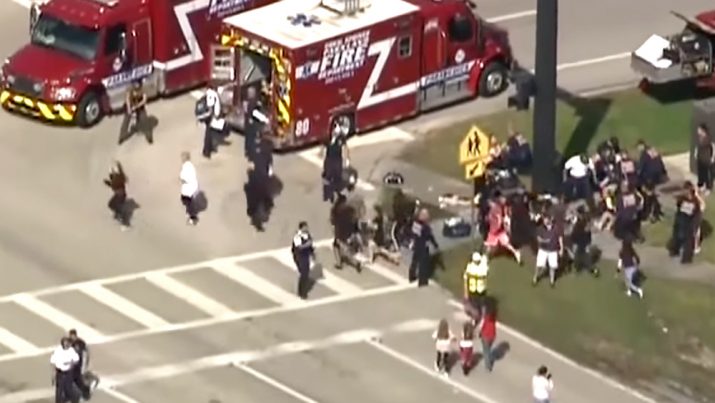 Now we get to the real repercussions of a corrupt Federal Bureau of Investigations that spends its time illegally spying on U.S. citizens (i.e. Trump campaign officials) and conspiring with deep state hacks to frame Trump rather than following up on serious leads about dangerous individuals who threaten to shoot up schools.

The Florida shooter, now identified as Nikolas Cruz — (originally misnamed by the Miami Herald, which was later corrected) — was reported to the FBI last September after commenting on a YouTube channel, claiming he wanted to be a “professional school shooter,” reports The Gateway Pundit.

In fact, here’s a YouTube video from the individual who reported Cruz to the FBI and later spoke with the FBI:

The individual who reported Cruz to the FBI is named Bennight. He explains in the video:

I looked up the number to my local field office and I called and left them a message. The next day I had two FBI agents standing in my office taking down the information and copies of the screenshot. They were asking me questions that of course I couldn’t answer. All it was on my channel was a comment, people leave pretty heinous comments on a pretty regular basis…

As DailyWire.com reports, the FBI was in possession of all the information they needed to prevent this mass shooting:

So, another major fail by the Federal Bureau of Investigation. Sure, there’s no way to tell whether someone who posts a threatening message will follow through on the threat, but it’s a another big black eye for the embattled bureau.

The FBI, it seems, has been too busy running deep state hoaxes against Donald Trump to bother with stopping real criminals. Also via Daily Wire:

…[T]he FBI has been busy jousting with windmills of late. They’ve been off on a wild goose chase trying to find evidence to prove President Trump colluded with Russians to influence the 2016 election. As part of that effort, they wiretapped phones of Trump campaign aides, winning court approval by using questionable “evidence” of wrongdoing.

The bureau has also been in internal turmoil. One FBI agent, Peter Strzok, was demoted after text messages with his mistress showed a hatred of Trump. And Strzok, it turns out, was heavily involved in both the Russia probe and the decision to clear Hillary Clinton in her sordid email scandal.

Deputy Director Andrew McCabe left the bureau earlier this month, reportedly amid a Justice Department probe into his handling of the Clinton email investigation.

In September 2017, a memo outlined an ongoing probe by the Department of Justice that found “systemic” misconduct problems at the FBI where the bureau was not reporting “high-risk security concerns” made against agents, Newsweek reported.

The Daily Wire adds, “perhaps it’s not surprising that the FBI failed to follow up on leads about the young man who would eventually go on a shooting spree, killing 17 and wounding 14. Maybe the bureau should get back to its core job — it is called the ‘bureau of investigation,’ after all.”

I used to have a lot of faith and trust in the FBI. In fact, I know former FBI agents who now share my horror at what the discredited agency has become: A “weaponized” political organization that runs deep state scams to destroy political opponents. Meanwhile, actual murderers who were reported to the FBI are running loose, shooting up schools even when they have directly threatened to become “professional school shooters.”

The deranged Democrats, not surprisingly, blame all this on “guns.” Yet there are over 300 million guns in America, and at least 299,999,999 of them weren’t involved in a shooting yesterday. The cause of the shooting is the person who pulled the trigger, and that person was reported to the FBI months ago, yet nothing was done to stop him from carrying out the horrific mass shooting. It makes you wonder: What exactly is the FBI investigating if not people who promise to shoot up schools? (Answer: They are still spending their time and effort trying to eliminate Trump, in defiance of the voters…)

In defense of the FBI, perhaps, it’s impossible for any law enforcement agency to stop all mass shootings, given the number of people on psychiatric medications who are bound to commit acts of violence sooner or later. But at least they should get their investigative priorities straight. When James Comey, Peter Strzok, Andrew McCabe and all the other treasonous actors were running a deep state operation to try to overthrow the democratically elected President of the United States, they were taking resources away from real investigations that could have stopped dangerous shooters like Cruz.

Under Obama, the FBI was turned into a Soviet-style “secret police” that focused its resources on destroying Donald Trump rather than catching criminals. And that’s precisely what led to these 17 deaths (so far) in Florida.

Shame on the FBI for abandoning its law enforcement duties. Maybe it’s time to shut it down altogether, or at least reform it from top to bottom so that We the People might once again have some trust in this discredited organization.